With effect from August 1, 2022, we are pleased to announce that we have signed an agreement with Cathleco UK to be the single point of contact from North America (the US + Canada) for Evac’s Cathelco marine growth prevention parts and services.  This partnership will further enhance the turnkey service you are accustomed to from EMCS, significantly improving our product and service offering to our valued North American customers.  EMCS Industries and Cathelco Ltd have a shared history and aligned values that began in Canada 67 years ago.  Our motivation for entering this agreement is to provide our customers with a focused provider in North America, offering you an unparalleled wealth of experience in antifouling + anticorrosion.

Cathelco marine growth prevention system (MGPS) pairs of copper and aluminum anodes mounted in sea chests or strainers and connected to a control panel. Where cupro-nickel pipework is used on board, a ferrous anode is used instead of the aluminum anode. In operation, the copper anode produces ions carried by seawater flow, creating an environment where barnacles and mussels will not settle or multiply.

By introducing copper ions in very small concentrations, around two parts per billion, the system interrupts the settlement sequence of mussel and barnacle larvae. Instead of adhering to the surface of sea chests, strainers, and pipework, the larvae pass harmlessly through the cooling water system to the discharge point. Without antifouling protection, pipes can become encrusted with organisms, leading to a blockage that reduces the efficiency of the seawater cooling system.

The action of the copper ions is assisted by aluminum hydroxide that is created by the aluminum anodes flocculating the released copper from the copper anodes. This highly gelatinous copper-aluminum hydroxide floc is carried throughout the system and spreads into the slow-moving areas near the pipe surfaces, where marine larvae are most likely to settle. As a result, the larvae instead pass directly to discharge.

At the same time, a cupro-aluminum film builds up on the internal surfaces of the pipes to suppress corrosion. This way, the system has a dual action, protecting seawater pipework against biofouling and corrosion.

Corrosion is accelerated in two ways. The biofouling on a metal surface leads to a decreased oxygen concentration below the fouling layer. This area becomes anodic when exposed to oxygenated seawater, resulting in pitting corrosion under the fouling. Another cause of corrosion is bacteria – sulfate-reducing and iron bacteria are well-known examples of microorganisms whose biological activity or metabolic by-products can cause corrosion. These bacteria live in areas with a low oxygen concentration, for instance, under a layer of aerobic fouling organisms or in de-aerated water such as that found in oil storage tanks and well flood water—efficient fouling control results in a reduction in pitting and crevice corrosion.

Most Cathelco marine growth prevention systems have a dual action, eliminating biofouling and suppressing corrosion. Where steel pipework is used, the corrosion suppression anodes are made of aluminum, whereas cupro-nickel pipework is protected using ferrous anodes. When these anodes are fitted, corrosion rates are significantly reduced, resulting in a longer lifetime for the pipework and other equipment connected to the seawater system.

Anodes are generally fitted in the sea chests when installing a system during vessel construction using special sleeves or flange mountings. If a system needs to be retrofitted before scheduled drydocking, on the other hand, the anodes can be mounted in the seawater strainers. This simplifies the replacement process when anode renewal becomes necessary.

In special cases where the Cathelco system is installed to supersede existing chemical-based antifouling equipment, the anodes can be mounted in treatment (electrolysis) tanks to reduce installation costs by utilizing existing pipework.

Options and features of the Cathelco MGPS 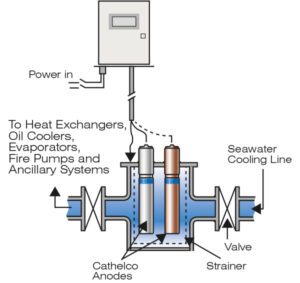 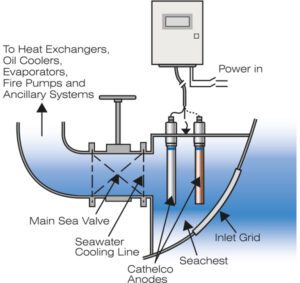